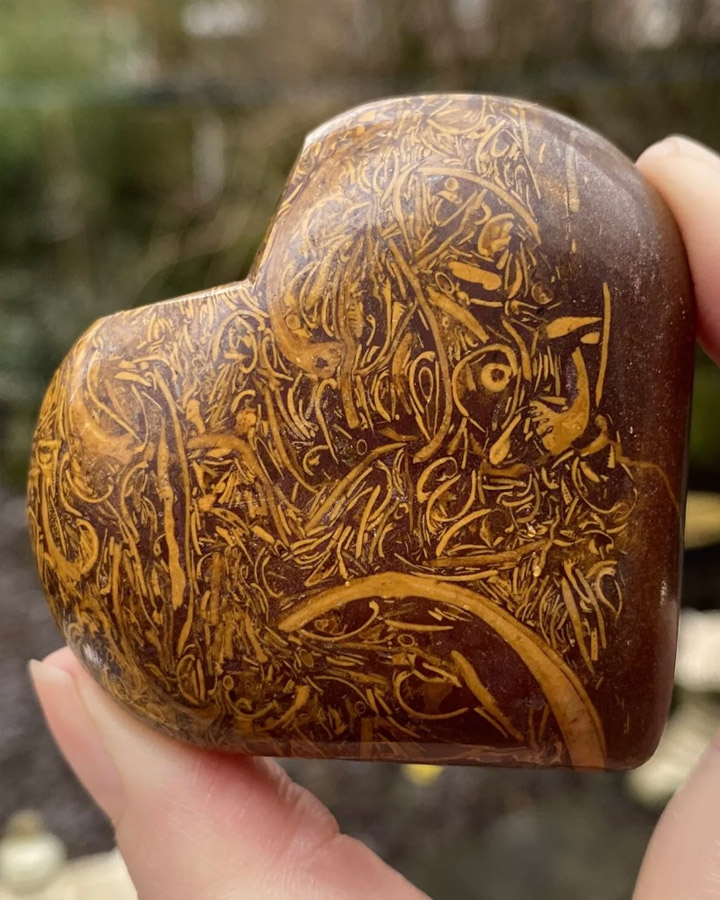 THE STONE OF RECHARGING

CALLIGRAPHY STONE, also known as Miriam Stone, Elephant Skin Jasper, and Arabic Stone, is a unique mineral composed of fossilized shells, bones, and vegetation from an ancient swamp. This complex stone is a result of the Himalayan Mountains shifting and forming the landscape we see today. During this time, the entire area was put under extreme pressure, with conditions ripe enough to fossilize and condense anything surrounding this newly formed mountain chain. This has never occurred anywhere else on planet Earth and makes this newly discovered crystal very appealing on the mineral market.CALLIGRAPHY STONES physical appearance and the story of its creation makes it very popular on the crystal market today. However, only true practitioners understand the value of the energy that it holds. One will be able to channel the powers of ancient Earth and all of its purity within.CALLIGRAPHY STONE holds the energy of the Earth as it was developing, it was a much different place than what we see today. The ground was very fertile, the air was extremely pure, and the elements combined were the perfect equation to enhance and exhibit life. This created pure life energy free for the taking. These are the basic building blocks of life and all of her beauty. This is the same energy contained in each and every Calligraphy Stone. Meditate with some form of this crystal (tumbled, palm stone, sphere) and begin extracting the vibrations which have been dormant since its creation.CALLIGRAPHY STONE has a soothing energy and as one begins to channel this ancient energy throughout their body, a calming and soothing sensation will begin to circulate. This will assist one in “loosening” their physical body and help create a stronger connection to Earth.CALLIGRAPHY STONE “plugs in”, nurturing and rejuvenation energy will soon fill your auric field. This helps in the overall protection of one’s physical body, as your aura can negate and deflect negative vibrations when strong enough.CALLIGRAPHY STONE is the “Recharging Stone”, due to its ability to replace one’s “batteries” with simplicity and ease. All it takes is a few minutes out of your day for your mind, body, and spirit to truly reflect the purest form of you.CALLIGRAPHY STONE is only found in the Himalayan Mountains.
Back to Crystals